Purchased Hacknet on GoG and it failed to start on macOS High Sierra v10.13.6, supposedly due to having System Integrity Protection turned on, which is a good thing.

Turns out, it was possible to play the game after a little ...hacking.

From then on out it's just:

I've got one of those external Apple iPad Smart Keyboards. I love everything about it except that there are times when it disconnects and I just can't seem to get the iPad to connect to it.

In fact, when I first got it and the new iPad, even the Apple Genius had serious problems getting it to connect, so much so he went to grab another new keyboard.

For a good while, it's been on and off, until I stumbled into a solution buried on an Apple Discussion formum.

Someone discovered that when they go from Airplane mode to WiFi (like in a Starbucks), the keyboard that was working just fine suddenly stops working. That's what I'm seeing.

He further deduced that the problem surfaced when, just after you connect, Apple throws up a "connection web page" where you sign in. It's at this 'dialog' where things go south.

What he discovered was that if you join the network, using the regular iPad screen's keyboard, and once connected drop everything by going into Airplane mode and right back out, you've still got your network connection and the Smart Keyboard springs to life again.

Curiously, while you're in Airplane Mode, the keyboard starts working again.

I've just tried this remotely, and it worked exactly as described.

I recently ran into a problem with macOS High Sierra in which I could not eject a drive because the system thought it was being shared.

I had previously shared it, true, but the client no longer had the device mounted.

smbd was confused and rejecting the unmount.

Even using diskutil to try an unmount didn't work. The OS was trying desperately to protect me from myself.

Eventually I found the solution, which was to use the force keyword in addition to the unmount:

I have a number of DroboFS drives, and these are no longer supported by Drobo.

As they still have quite a bit of life in them, and it's getting harder and harder to find information on Drobo's site front-and-center, I thought I'd log some useful information for later.

If it's not discovering drives, do this; though I've never had to.

According to Drobo, the largest size approved drive is 4TB for the DroboFS. See this resource, and look at the Legacy Products section. And, it only handles SATA.

With newer models, it seems one can put 10-12TB drives in them.

Choosing a drive can be tricky, but it seems that the Enterprise SATA is all purpose, as well as it works in all models except the Drobo Mini, making a viable upgrade path possible without ditching the drives.

The drive models list a number of contenders, but suggests that the Seagate Constellation and the Western Digital Black series are the winners.

Upon reasearching on Amazon, it seems there's actually a WD Black and a WD Gold to pick from. The WD Gold has a larger cache, has faster internal data rates, and seems to use less power — making it the choice of data centers and NAS systems, opposed to the WD Black, which seems to be more for desktops.

I really wish drive manufactures would merely label in plain English what the drive did and how it was optimized, rather than hiding behind a color code.

Attempting to format a new Seagate Expansion 4TB USB3.0 drive under Apple's macOS (Sierra or High Sierra) fails when the new drive is pre-formatted as NTFS for your PC. 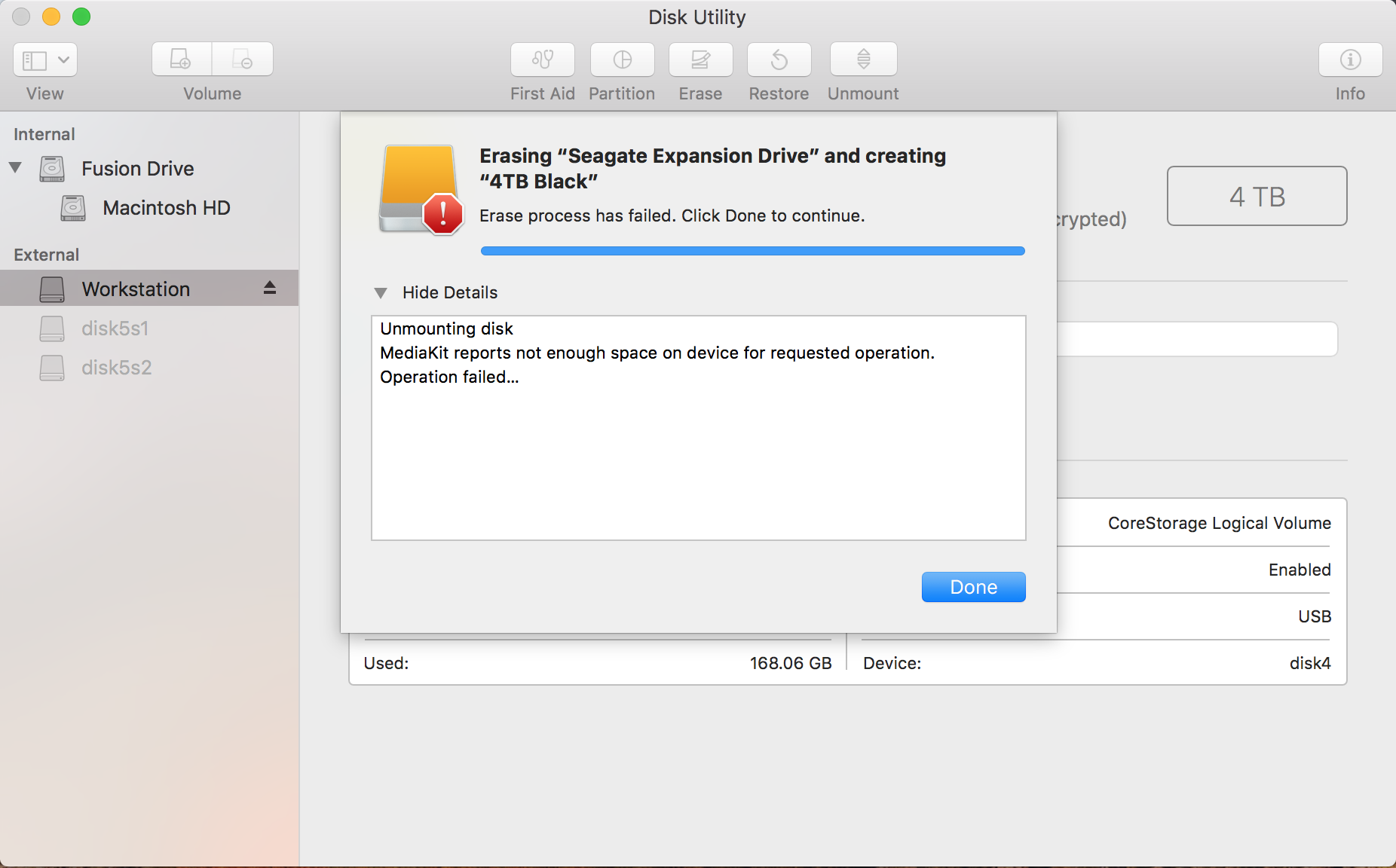 Here is what the drive looks like when you look at it from the command line:

IMPORTANT NOTE: In these examples we're showing the disk at /dev/disk5, your drive may vary -- and this is not something you want to get wrong.

If you look at the GUID Partition Table (GPT), it's full of stuff.

You want to destroy that before you use Disk Utility:

$ sudo gpt destroy /dev/disk5 # YOUR DRIVE MAY BE DIFFERENT

If you look at the GPT immediately after destroying it, it will look like this:

At this point you can use Disk Utility or any other tool of your choosing to format it.

Finally, if the disk just won't eject, do this:

In the past, I've run php and allowed it within user subdirectories, thus content in public_html can use .php files.

All was going well until I upgraded the system, then all kinds of things broke relating to home pages.

Turns out there's a new policy with PHP that disables PHP by default in user home directories. This is actually a really good idea for security reasons.

However, if a system doesn't have untrusted users, it can be okay to re-enable.

This requires going into the /etc/apache2/mods-available/php*.conf file that contains the text public_html, and commenting out the IfModule statements.

Do NOT set the content within them to On, as it may be so tempting to do; for doing so will prevent .htaccess from being able to override the setting.

This one tripped me up until I saw the obvious.

Hexo posts have a tags attribute in their "frontmatter" (the meta-data at the top of a post).

Initally, I incorrectly tried putting a comma separated word list in that field.

This led to Hexo generating a single tag called "hexo, markdown, solved", which wasn't what I wanted.

Scouring the documentation didn't seem to flaunt any obvious answers, and even the primary example pages that Google returns don't use tags that much.

But, I did stumble across one, and the light went on. Dummy, it's YAML. That means the "frontmatter" is an array.

I recently started playing with Hexo and nearly gave up completely due to the markdown system provided with it.

I found strange behaviors, such as multiple adjacent lines were being treated a linebreaks instead of a paragraph, as markdown normally does.

There was a workaround, which involved changing a setting in the _config.yaml file, but that didn't fix things completely.

If a line started with a link, then there were situtations where it wouldn't wrap it in a paragraph and weird things happened. If a link came at the end of the line, it'd usually work fine, but if there was a period immediately after the tag, then it'd absorb the next paragraph.

I found with all kinds of permutations just trying to build a simple example.

Then, I read about hexo-renderer-markdown-it which was described as "Markdown down right."

I uninstalled the default version:

Installed the new one:

And without changing any of my valid markdown, the page rendered perfectly.

This plugin should be the default version that ships with hexo.

While exploring hexo, I ran into a problem installing it.

yarn was aborting the install claiming that there was no <code>--production</code> switch.

A quick check of yarn's version number showed that I was somehow way out of date.

According to yarn's installation directions this was merely a matter of performing a self-update, which yarn also claimed it wasn't able to do, or to install an updated pubkey.gpg and install/update with apt.

These solutions didn't work either.

The problem was that another package, cmdtest, had it's own obsolete copy of yarn.

The solution was simply to uninstall it, then install yarn with apt: